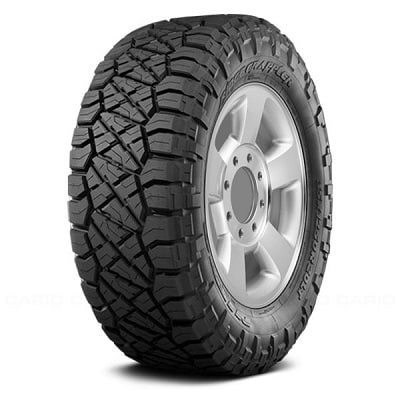 Hybrid tires are now lording over the mainstream marketplace. But out of all hybrid truck tires, the Nitto Ridge Grappler struck a chord in our hearts and minds. Truth be told, the Ridge Grappler is one of the best all-terrain tires we tested. We were blown away by how good it is in off-road driving. However, we didn’t find any problems with its on-road performance, either.

Nitto is marketing the Ridge Grappler as a cross between an extreme mud tire and an all-terrain tire. With this alone, it’s easy to understand why this tire is great for mild to moderate off-road driving. But what’s really surprising is the amount of refinement you get when you’re back on the streets. With this in mind, we like to think of it as a hybrid between three tires: all-terrain (A/T), mud-terrain (M/T), and highway terrain (H/T). When was the last time you heard of such a rubber?

In order to confirm our findings, we got hold of a beat-up 2014 Toyota Tacoma double cab with a 4.0-liter V6 motor, all-wheel-drive, a five-speed manual transmission. It’s not easy finding a manual car these days. But when it comes to off-roading, we prefer the challenge of rowing gears ourselves. It not only provides a more direct feel, but a manual allows you to go harder while still feeling the absolute limits of what the truck can do.

Our test vehicle for this Nitto Ridge Grappler review came with aftermarket 17-inch wheels and 265/70R17 tires, which are still fairly new based upon the first inspection. Imagine our surprise when we found out the tires were more than three months old! The owner used to be a big off-road fanatic, but the arrival of his second child means less time for off-roading adventures and more time for family. The truck’s been sitting in his garage for the better part of two months. The last time the truck was used for off-roading was less than six months ago, and he bought the tires exactly a month before having a baby. 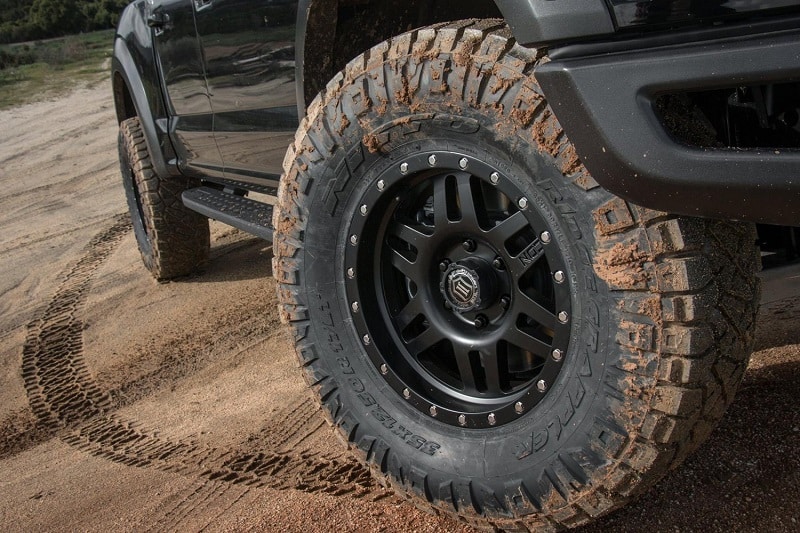 One look is all it takes to discern Nitto’s Ridge Grappler is a nice-looking tire. In fact, it looks newer and more aggressive than Terra Grappler G2, and it has to be since it’s designed and engineered to perform better in off-road driving than Terra Grappler G2. The tire is festooned with alternating shoulder grooves arranged in varying widths and lengths to maintain steady traction over dry, wet, loose, or demanding surfaces. The zig-zag pattern of the lateral grooves also provides the necessary biting edges for advanced traction.

With large, chunky, and aggressive tread blocks, one can’t help but wonder how this tire rolls silently over smooth tarmac, and the answer is simple. Nitto utilizes a variable pitch tread pattern in the Ridge Grappler to cancel out unnecessary road noise and vibration. This not only helps to deliver a smoother ride, but it also plays a huge part in treadwear. The tire also has a reinforced block foundation to reduce flex while making the tread blocks stiffer to offer relentless grip.

You’ll also notice the step block edges on the center blocks. More than a design feature, those tapered, step block edges are responsible for improving grip, traction, and steering feel on all types of road surfaces. And similar to other Nitto A/T all-season tires, the Ridge Grappler also comes with a dual sidewall design. And no matter which side you want, there are staggered shoulder lugs that provide additional grip when navigating over deep snow, thick mud, and soft sand.

The true test of a hybrid all-terrain tire is to see how it performs in extreme off-road environments. While we never got the chance to test the rubber over snow or deep mud, we were able to do some mild off-road trailing with huge rocks, gravel, and a peppering of sand and dirt. And since we’re using a borrowed truck, we figured it best to spend more time on-road to really find out how it feels over smooth highways and pockmarked city streets.

Right off the bat, Nitto’s Ridge Grappler felt more secure and stable on dry roads than other A/T tires we tested so far. It’s foolish to call this tire sporty or to say our Tacoma test vehicle has the handling properties of a sports car. But with these tires, our test vehicle felt like it was riding on a premium set of highway terrain rubber.

We never felt the tire skip a beat as we sped like demons on an empty and deserted patch of highway. Even the braking felt pretty strong for a tire with huge and aggressive tread blocks. This is tougher to achieve in a chunky all-terrain tire, and we were left thoroughly impressed by what this tire can do on dry, normal roads. 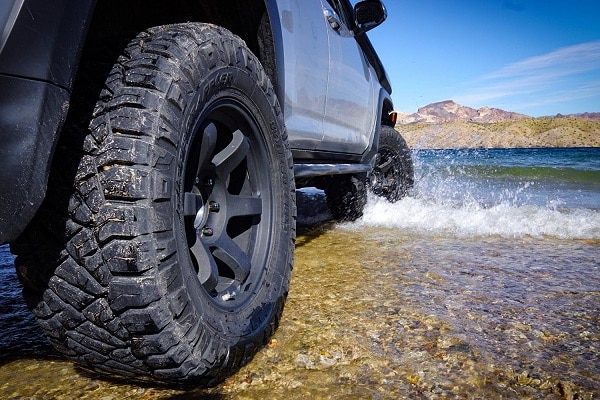 It was mostly sunny and dry during the 48 hours we had the truck, but we encountered a mild downpour on our way back to civilization. We got to test the Nitto Ridge Grappler over wet trails and soaking highways, and it felt the same in the dry. Meaning, we never had problems with hydroplaning, and the tires never felt they were hunting for grip despite the presence of light mud and wet dirt. The tires made our test vehicle felt relentless as we sped and braked hard over a wet highway. 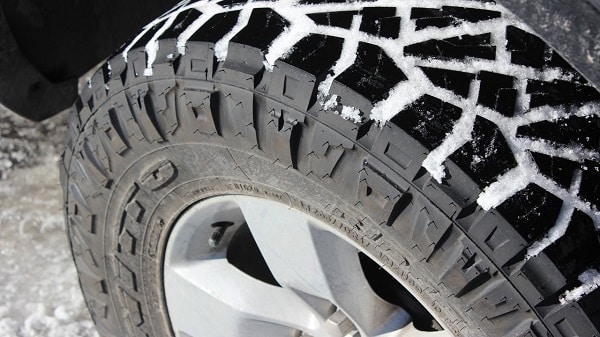 We would love to test the Nitto Ridge Grappler over snow and colder temperatures, but our test drive was scheduled near the end of summer. However, our colleague used to work for a tire shop in Detroit, Michigan and has the necessary experience with this tire over snow. He told us it’s one of their hands-down favorites in terms of icy winter traction, and we weren’t surprised. Those chunky shoulder lugs and alternating shoulder grooves are not only stellar over mud, but they conquer snow much better than an ordinary set of all-terrain tires. 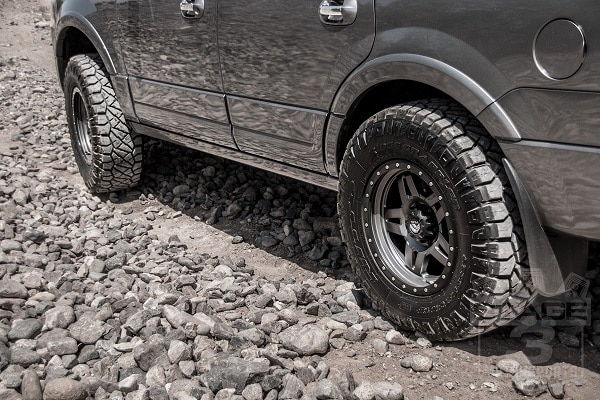 We’re not the biggest off-road freaks, but we like it when a tire motivates our rig over tricky off-road terrain. Since the Nitto Ridge Grappler is essentially a refined mud tire, those high void tread blocks made mincemeat out of hard-packed trails. On softer terrain, it also felt invincible. We figure it can do some rock crawling as well, but there are always limits to what a tire can do, especially out in the wild outdoors. Only the thickest mud, the deepest snow can, or overly large rock boulders can stop these tires. Luckily for us, we didn’t find any semblance of terrain wild enough to upset the composure of Nitto’s Ridge Grappler.

It also helps that our Tacoma test vehicle came fitted with all-wheel-drive and a slick manual transmission. In short, we didn’t feel the tires were hunting for traction as we attacked every mile of dirt road we can find.

The Toyota Tacoma is not exactly the benchmark in comfort, but we were expecting a bouncier ride with the Nitto Ridge Grappler. But once again, our expectations were thrown out the window. You may find this hard to believe, but the on-road comfort and refinement of the Ridge Grappler are simply off the charts. The Tacoma’s suspension is on the stiffer side of the spectrum (which is natural since we’re talking about a truck), but the owner agreed with us that it’s one of the most comfortable all-terrain tires for street driving.

We can honestly say road noise and tire roar is kept at the barest minimum especially at slow to medium speeds. The Nitto Ridge Grappler tires were quieter than Terra Grappler G2, but it’s not as quiet as a set of proper highway terrain tires. As we said, there’s barely a hint of tire noise at slow to medium speeds, but there’s more noise as you speed up. But since we’re talking about an aggressive-looking A/T tire, we still give it a high score in terms of road noise (or the absence of it).

The Nitto Ridge Grappler in our test vehicle were still fresh since the car has been sitting for quite a while. But according to our colleague, the Terra Grappler G2 is better in terms of treadwear. The Terra Grappler is accompanied by a 50,000 or 65,000-mile treadwear warranty as proof of the tire’s penchant for longevity. However, we didn’t find such a warranty for the Ridge Grappler. 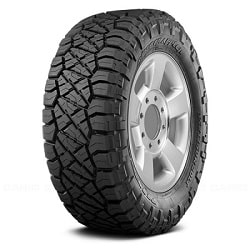 If you can afford it, the Nitto Ridge Grappler offers the best compromise for both on and off-road driving. We highly recommend the Ridge Grappler if you’re looking for an excellent all-season and all-terrain tire that offers a refined and comfortable highway ride.