Skip to content
The sidewall of your tires provides you a great deal of information which might be neglected due to the lack of tire-related awareness. Numbers and letters indicate a lot of facts about your tire including dimensions, construction, operating characteristics and producer. In this article, I will show you how to properly understand information printed on your tire sidewall. This would be helpful, particularly when you need a replacement for your tire. There are 3 main important sections on each tire sidewall, these include:

This shows fundamental features of your tire, consisting of tire type, tire width, aspect ratio, construction, wheel diameter, load index, and speed rating.  Let’s take the picture bellow as an example:
As can be seen from the picture, the tire specs are P225/60R16 97V,  where, P is tire type, 225 demonstratestire width, 60 is aspect ratio, R shows construction, 16 indicateswheel diameter, 97 indicates load index, and V displaysspeed rating. Let’s discuss all above components of the tire specs in details.

This is the first letter printed on the sidewall, which illustrates the type of vehicle suiting the tire. In this case, P stands for Passenger metric. You might see other kinds of tire, such as LT (light truck), T (temporary spare), or ST (Special trailers).The absence of the letter in the first position indicates a passenger constructed tire built to European standards.

On the right of the aspect ratio is a letter indicating the tire construction. “R” means “Radial”. Radial construction is the most popular, compared with other types including “diagonal construction” (D), and “belted” (B).

After the construction letter is wheel diameter. This number (in inches) will let us know the diameter of a wheel that the tire is designed to fit. As can be seen on the example, the tire would fit a 16-inch wheel.

The next two numbers help us determine the tire’s load index. This index indicates how many pounds a tire can carry. It is important to note that the number indicating load index is not the exact quantity of pounds that a tire can sustain because such number is just an assigned one. In the example, the number 97 indicates that the tire could carry 1609 pounds. In order to find out the exact weight that a certain tire can carry, please refer to the following table.

This is the last letter in the tire specs, this shows you the highest speed at which you can drive safely as your tire is certified to maintain safety under specified conditions. Speed ratings represented by letters from A (the lowest) to Y (The highest). The letter “V” means the maximum speed recommended is 149 miles per hour or 240 kilometers per hour. Even though your tire can perform at this speed, you have to bear in mind that exceeding the lawful speed limit is not only illegal but also especially risky. The following table gives information on speed ratings: 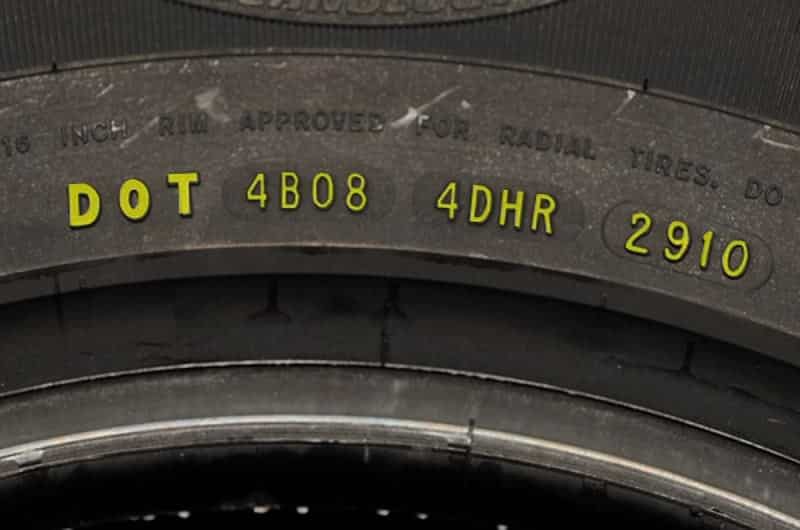 This section is an assurance proving that your tire complies with all safety requirements for on-road use of the Department of Transportation.  Tires having no DOT designation should not be legally driven in the US. The letters immerge after “DOT”(4B in the example), called the plant code, identify the tire’s maker and site of creation. After that, you will see the two characters (08 in the example), indicating the tire size in a manufacturer’s internal code. The next four characters (4DHR in the example) are also determined by the producer, showing brand characteristics of the tire. The last four numbers (2910 in the example) give you information about produced date of your tire. The first two numbers are the manufactured week, while the others stand for manufactured year. For example, 2910 means the 29th week in the year 2010. By this way, it is easy to recognize when your tire was made.

The Uniform Tire Quality Grading (UTQG) was established by the National Highway Traffic Safety Administration (NHTSA) to test tires following government prescribed test methods and then grade each tire on three main components: The Uniform Quality Grading (UTQG), organized by the National Highway Safety Administration (NHTSA), is a way of tire classification. According to UTQG, there are three core components:

This indicator shows you the tire’s wear rate. In fact, it would be incomparable to tire made by other manufacturers. The baseline is 100; therefore, it may be theoretically believed that this tire lasts three times longer than the minimum with 100.

There are 4 grades of traction, comprising of AA (the highest), A, B, and C, reflecting the tire ability to immediately stop in wet conditions. This is measured by the government’s criteria. If a tire is rated at least grade C, I will be accepted to use.

Temperature grades range from A, B to C. A is the highest and C is the lowest. They reflect the tire’s ability to dissipate heat. It is similar to traction grades that a tire would be rejected if it is rated under C.

Additional Information on Your Tires

Sometimes, you may see tires which have special icons or symbols. For example, a Mountain Snowflake symbol proves that the tire is certified to meet industry-established snow traction performance requirements. Likewise, other tires might have passed specific tests under harsh conditions.

In short, being able to understand the information on your tire sidewall is necessary, especially when you need to replace it, as you could by an appropriate one without any difficulty. If you have read this article carefully, you would comprehend any tire sidewall’s parameter.